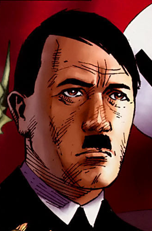 Austrian-born German politician, Adolf Hitler, was the leader of the National Socialist German Workers Party, known as the Nazi Party. He ruled Germany from 1933 to 1945, serving as chancellor from 1933 to 1945 and as head of state (Führer und Reichskanzler) from 1934 to 1945.

Hitler and the Axis powers formed alliances with villains such as Clown, Claw, Green Sorceress, and many others. Some villains worked directly under Hitler such Iron Jaw and the Rodent.

Hitler and his forces came into conflict with almost all of the superheroes active during WWII, even facing some, such as Death Defying 'Devil and Silver Streak, personally.

Retrieved from "https://projectsuperpowers.fandom.com/wiki/Adolf_Hitler?oldid=5534"
Community content is available under CC-BY-SA unless otherwise noted.