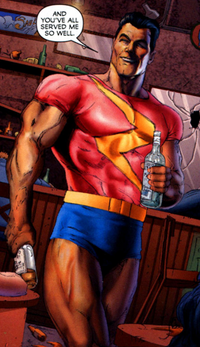 Scientist Andrew Bryant was experimenting with gamma and infrared rays and discovered that by crossing them he gained superpowers. He uses these abilities to fight crime, with the help of his girlfriend Detective Grace Adams (of the Agatha Detective Agency). Captain Future can fly, hurl energy bolts from his hands, and has super strength. But strong blows to the head can render him unconscious and he must frequently use his machine to recharge his powers.

At least, that was what his fellow superpowers thought. In reality, Captain Future was Zeus, the chief god of the Ancient Green pantheon. Like other heroes, Captain Future was captured in Pandora's Urn by Fighting Yank in 1947. The experience of being trapped in the urn caused him to drop the masquerade and act like a self-indulgent, hedonistic entity that he was. He clashed with his fellow heroes, beating back most of them.

able to become a living thundercloud.

Retrieved from "https://projectsuperpowers.fandom.com/wiki/Andrew_Bryant?oldid=5978"
Community content is available under CC-BY-SA unless otherwise noted.