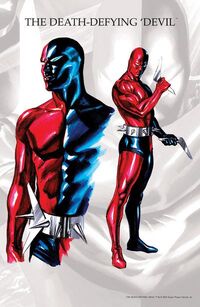 Bart Hill's parents were killed while in Australia. Bart was then raised by a tribe of Aborigines who taught him the art of using boomerangs. As an adult he returned to the U.S. and fought crime as Daredevil.

The 'Devil fought an epic war against the Claw in the 1940s. Prior to the U.S. being involved in World War II, The Claw allied himself with Adolf Hitler. This prompted the 'Devil to team up with the Silver Streak and other heroes to fight the combined forces of the Nazis and The Claw. Later on, 'Devil found himself a group of sidekicks called the Little Wise Guys.

Sometime after the war, Fighting Yank managed to trap the 'Devil in Pandora's Urn. When the Urn was broken, 'Devil reappeared in Paris, France. He came to the aid of french police officer Justine Boulet as she struggled with a group of thugs from the terrorist group known as the Claw. Unable to speak after his time in the Urn, he communicated by writing.

After joining his old allies in battle against the Dynamic Forces, the 'Devil and Justine went off to investigate the Claw organization further. During the course of this investigation he encountered the Deadly Dreaded Dragon, a man who seemingly possessed the same skills and abilities as the 'Devil. Seriously wounded in an encounter with the Dragon, 'Devil discovered he had a new healing ability. He also discovered the Dragon was Curly, a former member of his Little Wise Guys. Curly is convinced that the 'Devil is not the real deal, because he saw Bart Hill die years earlier.

As it turned out, Curly was right. The 'Devil that was trapped in the urn was actually Bart Hill's costume, which turned out to be a mystical symbiotic entity. The exposure to the urn made the suit sapient and gave it Bart's memories, leaving it none the wiser about it's true nature.