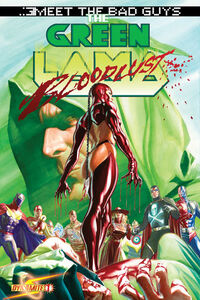 Bloodlust is the granddaughter of Tsarong, a loyal follower and confidant to the Green Lama. Tsarong was recently killed while fighting alongside the Green Lama and some of his fellow heroes. Bloodlust has made it her mission to exact revenge on the Green Lama, who she blames for the death of her grandfather.

Bloodlust is capable of drawing power from her dead ancestors, and uses this power to boost her strength, reflexes, and endurance.

Bloodlust is superbly well-trained and in excellent physical condition. She has been trained in a number of forgotten martial arts disciplines.

Equipment: None known.
Transportation: None known.
Weapons: Bloodlust has a sharp blade at the end of her braid, which she uses like a whip. She also has claws in her gloves.