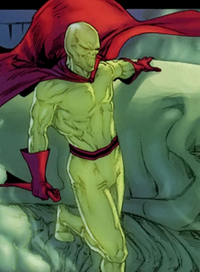 Pilot Brad Hendricks wore the costume of the Ghost to fight against the Germans in occupied Europe. He also waged an ongoing war against the Claw, nearly killing the villain on at least one occasion. Ultimately, the Claw still managed to survive, however. The Ghost had no powers, but he did have the high-tech Ghost Plane.

Symbiotic relationship with his plane.

Because he and his plane are now one he feels all that the plane feels.