Start a Wiki
Bruce Carter I 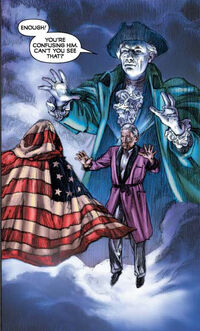 During the Revolutionary War, Bruce Carter I was given a special mission by General George Washington. He was to deliver secret plans to a part of the American forces. Carter stopped at an inn and was killed by British agents. For failing his mission, Carter's spirit was cursed to roam the earth.

In 1941, Carter's spirit appeared to his descendant, Bruce Carter III. He bestowed a magic cloak to Carter III, which the younger Carter used to become the Fighting Yank. Carter I used his abilities as a ghost to aid Yank against the Axis Powers of World War II.

When Yank learned of Pandora's Urn, Bruce Carter I convinced him that in order to trap the evil of the world, the world's heroes had to be trapped as well. He helped Yank trap his comrades in the Urn for years.

When The American Spirit appeared to the elderly Yank to convince him of his error, Carter I reappeared to try and convince Yank they had done the right thing. Carter I then followed Yank on his quest to free the heroes. As Yank lay dying in Tibet, he assumed Carter I's curse. Now the younger Carter is trapped in this world, while the elder Carter has seemingly crossed over.

Retrieved from "https://projectsuperpowers.fandom.com/wiki/Bruce_Carter_I?oldid=5571"
Community content is available under CC-BY-SA unless otherwise noted.