Edit
watch 01:36
We're Getting Mutants in the MCU - The Loop
Do you like this video?
Play Sound
Fighting Yank 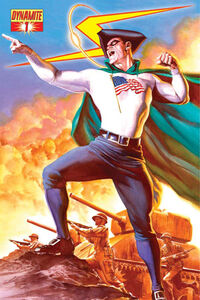 Bruce Carter I was a soldier in the Revolutionary War. Given a special mission by General Washington, Carter was killed by British spies and the information he was carrying fell into enemy hands. His spirit was confined to earth for his failure.

Bruce Carter III was the spitting image of his great-grandfather. He was visited by the ghost of Bruce Carter I, who showed him the location of a magical cloak and tri-corner hat that could give the wearer invulnerability and super strength. Only Carter III's girlfriend (later his wife), Joan Farwell, knew of his dual identity.

During World War II, Fighting Yank was made aware of Pandora's Urn. He was convinced that in order to trap the world's evil inside, he must also trap the world's heroes. He first trapped the Flame at the battle of Kokura. He then embarked on a mission to trap all the heroes.

Later, as an elderly man, Bruce Carter III was visited by The American Spirit. The Spirit informed him of the error of his ways, and that he must free the trapped heroes to make things right. Carter then visited his old friend the Green Lama in Tibet to ask for his help.

They found the Urn in the possession of Dynamic Man, another wartime ally. Dynamic Man and his Dynamic Family were no longer the friends they remebered, however. Carter managed to break the Urn, freeing the heroes who are scattered around the world. A long, world-wide battle with the Dynamic Forces followed. The Fighting Yank was struck down in Shangri-La in an attack by the Crusaders. He survived, but was left behind by his allies. Unexpectly, he was shot by three arrows from the returning Arrow. Before he died, Yank took on his ancestor's curse, and now aids the Superpowers in his new ghostly form.