Edit
watch 01:36
We're Getting Mutants in the MCU - The Loop
Do you like this video?
Play Sound
Dart 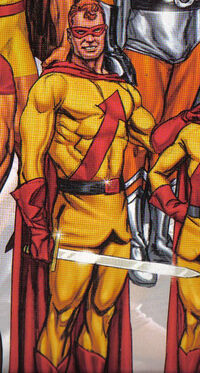 A gladiator in Ancient Rome,Caius Martius was given by the gods the power of flight so that he might fight for the rights of the average citizen. Unfortunately, one day he took on an evil sorcerer and was trapped in a block of stone.

Later, he emerges In the modern era from the stone to find himself in an American museum. He takes a new last name, "Wheeler," and begins fighting crime in modern society with his new sidekick Ace, who joins Dart after witnessing a horrifying drive-by shooting which kills his parents. With nothing better to do Ace joins the Dart as his side-kick 'Amazing Boy'. The dart can fly and wields a sword to use in combat.