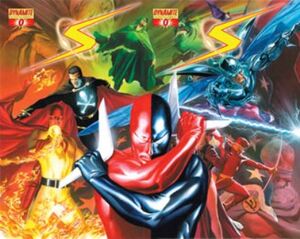 Bruce Carter III, formerly the World War II-era hero Fighting Yank, is now an elderly man. As he sits quietly in his home, thinking and wrestling with his regrets, he's confronted by an apparition. Carter mistakes the ghost for that of his colonial-era ancestor, a spirit which guided and advised him throughout his WWII adventures. The ghost, shrouded in an American flag, is instead an amalgamation of the spirits of patriots, heroes, and martyrs who fought and died for their country. The apparition has come to accuse Carter of betrayal and warn him of his impending death. Carter flees from The American Spirit (for that is the name of this Dickensian apparition).

Through a series of flashback sequences, we learn Fighting Yank's WWII backstory. In a meeting between an unidentified general, Fighting Yank, Green Lama, Black Terror, The Flame, and “Big Blue” (1), it is revealed that Adolf Hitler has come into possession of a mystical object which is the original source of all the world's evil: Pandora's Box (actually an urn) described in the ancient Greek myth. Bruce Carter in his guise as The Fighting Yank, is tasked by the U.S. Government to parachute into Nazi Germany and steal the urn.

Pandora's urn introduced evil into the world, but also released hope; while the Axis powers are the representatives of that evil, the 1940's “mystery men” are conversely the embodiment of hope. The mystical creatures released when the urn was opened are visible as physical entities when special goggles (invented by Alan Oppenheimer and other atomic scientists) are worn. Yank puts on the goggles and is immediately attacked by the creatures. After he removes the goggles, Yank's “spirit guide” (the ghost of his colonial-era ancestor, Bruce Carter I) tells him that since hope was the last thing released from the urn the only way to reimprison its evil is to first trap his fellow mystery men within it.

Fighting Yank attempts to convince his allies to enter the urn voluntarily, but they refuse. Carter determines to imprison them one at a time. Three days after the bombing of Hiroshima, the mystery men are in Kokura, Japan, the intended target of the second atomic bomb. Their purpose is to stop the bombing by obtaining a Japanese surrender. Instead of surrendering, the Japanese army attacks the heroes, resulting in a large-scale battle. The U.S. military, in the mistaken belief that the resulting dust and debris are cloud cover obscuring the city, switch the target city to Nagasaki. Meanwhile, Carter takes advantage of the confusion to trap The Flame within the urn; it was necessary to imprison The Flame first as his power would help the other mystery men survive within the urn.

The Flame is presumed killed, ironically, by the fires of Kokura. The Fighting Yank imprisons Flame Girl after The Flame's memorial service. In the years following World War II, Carter continues to imprison his fellow mystery men, one by one, including the newer heroes which spring up after the war. One of the few heroes to escape this fate is The Green Lama, who returned to Tibet immediately after The Flame's memorial.

Now, in Carter's twilight years, The American Spirit has come to indict Carter for this betrayal. Carter's ancestor arrives to argue with The American Spirit, to convince Carter that he did indeed do the right thing. The patriotic apparition counters with a catalogue of the world's ills which have occurred since the mystery men were imprisoned in the urn: the rise of Dynamic Forces, a mega-corporation which plays on the world's greed and sloth by offering material creature comforts to the masses; a fascist police forces which cows the population and keeps them in line; a zombie army made from the decomposing bodies of America's dead military men, sent to the Middle East to fight on the government's behalf, forced to battle and be reconstructed over and over endlessly, while the soldiers' souls languish in limbo. “How can you say you've done anything to stop or contain evil?...All you've done...is to stop those who might have helped keep this from happening,” The American Spirit argues.

Carter makes his decision. He asks The American Spirit what he must do to make amends. The answer lies in Tibet; despite his advanced age, Carter must journey there and seek councel from The Green Lama, even though Carter suspects that Green Lama will kill him for what he's done.

(1) Identified as such in the Alex Ross concept art, the character appears to be the original 1940's Blue Beetle. 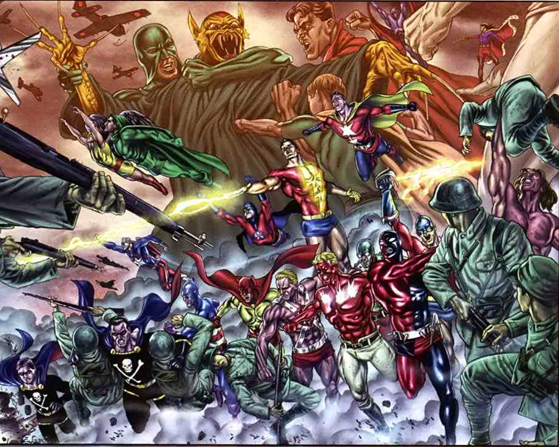 Retrieved from "https://projectsuperpowers.fandom.com/wiki/Comics:Project_Superpowers_Vol_1_0?oldid=5664"
Community content is available under CC-BY-SA unless otherwise noted.