Start a Wiki
"The Rumors of My Demise..." 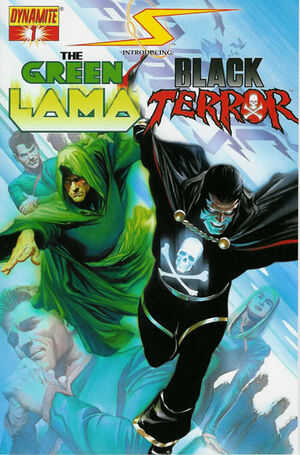 Appearing in "The Rumors of My Demise..."

Synopsis for "The Rumors of My Demise..."

In New York City, atop the Dynamic Forces skyscraper headquarters, Dynamic Man and Dynamic Woman look down upon the city. Godlike, they regard humanity as little more than the ants they appear to be from atop their glass and steel eyrie.

As Bruce Carter, the former Fighting Yank, struggles through the snows of Tibet, he is beginning to realize that he has been badly misled by the ghost of his ancestor and namesake, that his ancestor might well be a traitor with his own hidden agenda. Reaching Shangri-La, Carter is greeted by Tsarong, Green Lama's manservant, who takes him to his master. Jethro “Jet” Dumont, the Green Lama, who has apparently not aged since the 1940's, greets Carter warmly. Carter confesses to Lama that he's trapped all of their former allies inside Pandora's Urn, and is surprised by Lama's nonchalance at the revelation.

Lama explains to Carter and The American Spirit that he's discovered the power of the “meta-natural” world. It has provided him with new abilities, one of which he immediately demonstrates. Leafy vines suddenly spring up from the ground and engulf the trio; when the vines peel away, they find themselves in New York City. The American Spirit tells Carter that Pandora's Urn will be found in the possession of Dynamic Man, a former ally who, like the Green Lama, wasn't “chosen” to be trapped in the urn.

At Dynamic Forces headquarters, Carter and Green Lama are ushered into the presence of the Dynamic Family who, like Jet Dumont, have also not aged. Dynamic Man is the caretaker of numerous artifacts, mystical and otherwise, left over from the dark days of World War II. Lama asks if Carter may see the urn. Dynamic Man makes to hand the urn to Carter but deliberately drops it instead. With surprising agility for one so elderly, Carter makes a diving catch. Carter himself breaks the urn open and is surprised when nothing happens. Dynamic Man laughs as he informs the duo that he'd had the urn exorcised, while Dynamic Woman hints that the Family may be something more/other than human. Then the Family members grab Carter and Green Lama and throw them down an elevator shaft, despite the fact that the Lama can fly. The elevator car, its cables cut, hurtles down at them; Lama smashes through it and the heroes exit onto the rooftop. Carter puts on his power cloak and mask to again become The Fighting Yank.

The Dynamic Family attacks the heroes on the rooftop, while hundreds of Dynamic Forces employees rush into the fray. Suddenly another mystery man bursts through the rooftop and comes to the aid of Yank and Lama. He is The Black Terror, who has determined that no one but he should have the privilege of killing The Fighting Yank as revenge for Terror's decades-long imprisonment in the urn. During the fight, Black Terror accidentally punches Dynamic Man too hard and discovers, to everyone's surprise, that Dynamic Man is actually a robot. The robot replies by hurling Black Terror from the rooftop. Cat-like, Black Terror lands on his feet on the sidewalk below, cratering it in the process. The Terror then shakes his fist at the rooftop and howls in rage, “OK, Bruce, Fighting Yank gets a reprieve – I'm not going to kill you until after I kill Dynamic Man!”

Retrieved from "https://projectsuperpowers.fandom.com/wiki/Comics:Project_Superpowers_Vol_1_1?oldid=5665"
Community content is available under CC-BY-SA unless otherwise noted.