Start a Wiki
"...The Whites of Their Eyes" 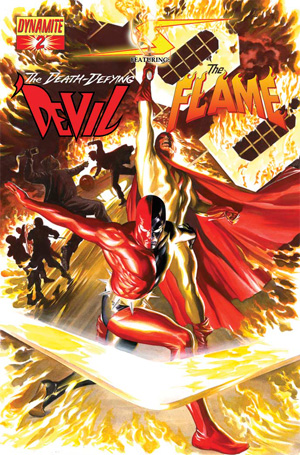 Appearing in "...The Whites of Their Eyes"

Synopsis for "...The Whites of Their Eyes"

Mystery men of the 1940's, released from Pandora's Urn, are popping up all over the globe. A red-and-blue clad, boomerang wielding figure emerges from the fabled sewers of Paris in time to see a street riot in progress...

Meanwhile, in New York City, the Fighting Yank and the Green Lama fight for their lives against the robotic Dynamic Family and their mechanical hordes. The Black Terror claws his way back up the side of the skyscraper and rejoins the fray, but seems just as concerned with the fate of his kid sidekick Tim (Kid Terror) as he does with the struggle at hand. Now that they know their opponents are robots instead of flesh and blood, the heroes battle with furious abandon. With a massive rumbling, huge trees and vines suddenly sprout from the heart of the Dynamic Forces headquarters; the Green Lama is using his meta-natural abilities to transport himself and his allies away from the lopsided fight.

In Paris, the mysterious stranger saves a law enforcement officer from the rioters, taking down a few members of the mob in the process. After their escape it's revealed that the officer is a woman who identifies the mob as a group of terrorists and herself as Justine. The stranger remains ever silent.

Back in Shangri-La after their escape from the Dynamic Family, the heroes discuss what they've experienced. The American Spirit is of the belief that the urn's destruction has released the imprisoned mystery men who are likely to reappear randomly around the globe. The Black Terror continues to threaten Fighting Yank's life, while the ghostly Bruce Carter I continues to try to sway his descendant away from The American Spirit.

War is being waged in the Middle East. The United States has replaced its traditional human soldiers with the F-Troop: the reanimated corpses of soldiers killed in previous wars. The war's goal is to destroy the world's petroleum source, which will prompt industrialized nations to switch to a new synthetic fuel created and monopolized by Dynamic Forces. Not coincidentally, Dynamic Forces also controls the U.S. military and is fighting the war with the undead F-Troop soldiers which are also Dynamic's patented creation. Acting as a pair of thorns in Dynamic's side are the heroes Samson (possessed of superhuman strength and the ability to repel ballistic missles) and The Scarab (clad in powered stealth armor), who meet and join forces to battle the F-Troop.

The Flame appears in Hollywood, California; disoriented and frantic to find Flame Girl (Linda), he accidentally sets the famous “Hollywood” sign on fire with his flame pistol. In Shangri-La, Black Terror, also frantic to find his old sidekick, argues with The American Spirit and decks Fighting Yank. In New York, the Dynamic Family is unable to destroy the meta-natural greenery which has overrun their skyscraper; they've called on The Crusaders to deal with the returned heroes...

Retrieved from "https://projectsuperpowers.fandom.com/wiki/Comics:Project_Superpowers_Vol_1_2?oldid=5666"
Community content is available under CC-BY-SA unless otherwise noted.