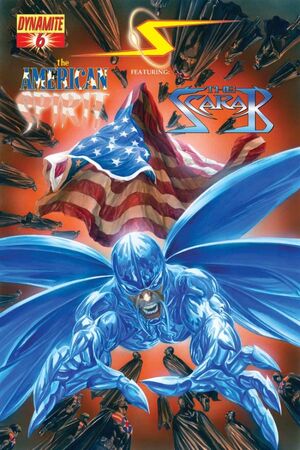 Appearing in "...The Perilous Fight"

Synopsis for "...The Perilous Fight"

A flashback sequence shows Bruce Carter I during the American Revolution promising that he'd “be damned” if he failed to deliver a vital message. Stopping for a drink on his journey, Carter is ambushed and killed in the tavern by British soldiers who subsequently find the message he is carrying; Carter is indeed damned as a result. As it later transpires, Carter I's guidance of his descendant and namesake, the Golden Age hero known as The Fighting Yank, is some sort of atonement for his misdeed, but it seems that he's no more competent in death than he was in life. The Arrow's three shots appear to have been accidental, but also seem to be finishing off Yank.

In New Shangri-La, Masquerade visits the quarantined V-Man and informs him that her “possession” power will also allow her to recover from the plaque he carries; she can freely enter his “bubble”, but V-Man is so consumed with self-pity that he rejects her. More importantly, she informs V-Man that Green Lama intends to use him as a “secret weapon” should the need arise. Lama arrives to round up Masquerade, as the Superpowers are bound for the Middle East to help Samson and Scarab in their battle against the F-Troop.

Scarab, meanwhile, reveals his identity to Samson and tells of how he once sold a scarab-shaped stone he found, used the money to establish a financial empire, and then built the powered armor he now wears.

Dynamic Man appears before the shadowy cabal known as The Supremacy, petitioning them for full membership. Dynamic Forces has been working for The Supremacy, following their orders, but Dynamic Man believes the time has come for him to become a member instead of a pawn. The Supremacy rejects his request, but not before informing him that more F-Troop forces are being dispatched to the Middle East. The ground there is also being sewn with a defoliating treatment which will prevent Green Lama's transportation powers from working; if the Superpowers appear there, they will be trapped.

The Superpowers prepare to leave for the Middle East, but Green Lama first tells the team what they are about to do and what to expect. The world's governments have become corrupt, and the Superpowers will need to operate without them, outside the law if need be. The team will be likely be villified by governments, in the press, and by the public. "We will become targets from this day forward, the outrage of the unknowing representatives of hidden corruption. Perhaps this is at the root of what it means to be a hero." They vanish, reappearing in the Middle East in time to aid Scarab and Samson in their fight against (and efforts to save the souls of) the F-Troop forces there.

Meanwhile, American Spirit tells the dying Fighting Yank that his friends will die unless he saves them -- by taking his ancestor's curse and damnation upon himself.

The Superpowers' battle is going badly. Heavily outnumbered by F-Troop forces (with more being airdropped), the team decides a retreat is in order. But Green Lama has collapsed; when he rises, he appears to have aged a half-century or more...