Start a Wiki
"...Throughout All the Land Unto All the Inhabitants Thereof..." 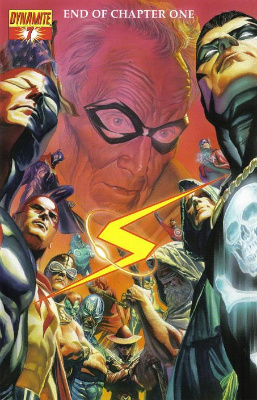 Appearing in "...Throughout All the Land Unto All the Inhabitants Thereof..."

Synopsis for "...Throughout All the Land Unto All the Inhabitants Thereof..."

The battle between the Superpowers and F-Troop rages on. As more and more undead soldiers parachute down from the sky, the rapidly aging Green Lama tells Black Terror that "all of them" the F-Troop must arrive before Lama will spring a trap on them.

As the members of The Supremacy watch remotely, the Superpowers continue to fight for their lives. On the verge of springing their "trap" (a mysterious figure covered in leaves), they suddenly discover that Green Lama is unable to transport them away. In desperation, Lama flies Masquerade up to one of the planes airdropping the F-Troop, where Masquerade uses her "possession" power on the pilot. She learns that The Supremacy has treated the ground with a chemical which neutralizes Lama's meta-natural powers and that they've been lured into a trap. Lama urges the heroes with flight powers to escape, but his teammates refuse to go. As the Superpowers prepare for death (and glory), Fighting Yank (or his spirit) appears; his cloak strengthens Green Lama who is then able to use his meta-natural abilities to transport the team to safety.

The mysterious leafed figure stays behind. Bursting forth from the greenery which protected the other Superpowers from his plague powers, V-Man springs Lama's "trap", walking impervious among the undead F-Troop soldiers and sending them to the final reward which they've previously been denied by Dynamic Forces' blasphemous reanimation technology.

With Green Lama as their spokesman, the Superpowers appear on television to address the public. "The nations of this world have grown corrupt with their own power...It is with this in mind that we shall become a check to balance the corruption of the nations of the world. You may call us terrorists, but we're not. We are Americans. And we are your friends."

The members of The Supremacy watch the broadcast and realize that the Superpowers have just declared war. Unknown to the heroes, one of their number is a Supremacy member: Amon Khadul, The Scarab.

Fighting Yank and Black Terror patch their differences as more heroes, responding to the worldwide broadcast, begin to arrive in New Shangri-La. The first on the scene is The Owl...

END OF CHAPTER ONE

Retrieved from "https://projectsuperpowers.fandom.com/wiki/Comics:Project_Superpowers_Vol_1_7?oldid=5827"
Community content is available under CC-BY-SA unless otherwise noted.