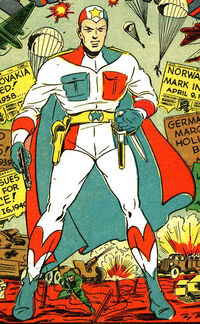 The Conqueror was a Daniel Lyons, an American pilot. While flying across the country, he crashed into the Rockies, near the hidden laboratory of James Norton, a reclusive scientist. Norton used the Cosmic Ray Lamp to restore the wounded pilot to health. The exposure also enhanced Daniel's physical and mental abilities to near super-human levels, as well as heightened regeneration abilities. Norton persuaded Daniel to use his powers to fight the Axis powers on their own turf. Assuming the costumed identity of the Conqueror, the young pilot did just that.

In addition to his low-level powers, the Conquerer relied on his fighting skills. He also used a revolver and a throwing knife.

Physical and Mental abilities are at near super-human levels, and possesses heightened regeneration abilities

Community content is available under CC-BY-SA unless otherwise noted.