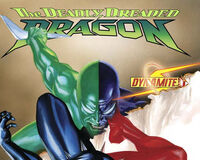 Curly was a member of the Steamrollers, a gang of juvenile delinquents, when he met the Death Defying 'Devil and his Little Wise Guys. After the clash between Steamrollers and Little Wise Guys caused Meatball to die of pneumonia, the remorseful Curly turned against the gang and joined Scarecrow, Jock and Peewee in the group. They aided 'Devil in his adventures until he joined the armed forces and later vanished.

Decades later, several heroes from World War II began resurfacing. Curly, now an old man, saw them on TV and recognized the costume of the 'Devil. Believing this man to be an imposter, Curly bought a drug that made him young again and donned a purple and green version of 'Devil's costume to confront the man he believed to be insulting the memory of his mentor. Armed with one of the 'Devil's original boomerangs, the Deadly Dreaded Dragon faced off with the newly returned 'Devil. The battle left the Dragon seriously wounded, but determined to discover the true identity of the man called 'Devil.