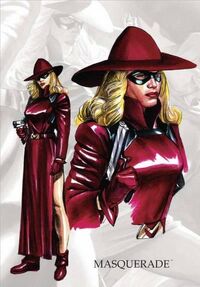 Miss Masque is the secret identity of Diana Adams, a young socialite who decides to fight crime and injustice in disguise. Originally, Miss Masque had no super powers but relied on her wit and a pair of revolvers.

Lured to the Fighting Yank's side by a distress signal from his servant, Markham, she was tricked into Pandora's Urn when he told her it contained the essence of his ancestors and needed it to revive him from his "injuries".

After she was released from Pandora's Urn, she manifested the ability to possess others.

Retrieved from "https://projectsuperpowers.fandom.com/wiki/Diana_Adams?oldid=5731"
Community content is available under CC-BY-SA unless otherwise noted.