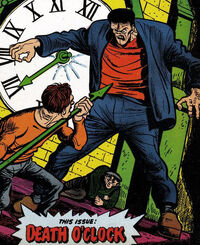 Frankenstein's origins are based loosely on the Mary Shelley's classic novel.Instead of Victor Frankenstein performing his famous experiment in early 19th century Europe, he did it in America of the mid-20th. Also, the monster was named Frankenstein, unlike the novel's Frankenstein's Monster.This version of the monster didn't also was a rampaging horror from the start. Bulldog Denny was Frankenstein's antagonist, but in the 24th issue, Denny gathered all the Prize Comics superheroes to fight the monster . These included Black Owl, Green Lama, and Yank and Doodle. Later, the monster was brainwashed into working for the Allies, only to be brainwashed again a year later by a Nazi scientist. He later becomes the basis for the F-Troops.