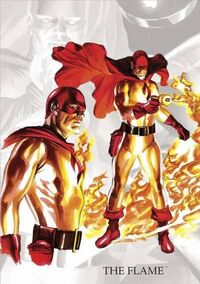 When Gary was a baby, his father Charteris Preston worked as a missionary in China. The elder Preston was washed away in a flood, but managed to save baby Gary by placing him in a basket. The basket was washed downstream to Tibet, where Gary was rescued by a group of lamas. They raised Gary in the lamasary, where they trained him in their mystical ways. Through this training, Gary obtained the ability to control fire and heat. He can raise his own body temperature to point where he can burst into flames, or melt bullets. He can control and direct any flame in his presence. He can also teleport from place to place by appearing inside of any fire source, no matter how small. The Flame's one weakness is water, which can severely weaken him. In order to provide fire whenever he needs it, the Flame carries a small, pistol-sized flame thrower. After Flame was injured battling the Octopus, he instructed Linda Dale, his girlfriend, to use a secret formula that would give her the secret powers of the flame people, becoming Flame Girl.

The Flame was the first hero trapped in Pandora's Urn. The Fighting Yank captured him during the Battle of Kokura. His power was needed to keep the other heroes alive within the Urn.

After the Urn was broken, the Flame reappeared in Los Angeles. In a panic and momentarily unable to control his powers, he inadvertently started a wildfire that caused the Hollywood sign to catch fire. The fire was put out by the returning Hydro. Hydro, the Flame and Pyroman battled Dynamic Boy in a brief encounter that resulted in Pyroman electrocuting Dynamic Boy. As the trio was about to be arrested, they were found by the Green Lama and other heroes.

Control fire, Prometheus power? what kept the hero's alive in the urn

Retrieved from "https://projectsuperpowers.fandom.com/wiki/Gary_Preston?oldid=5980"
Community content is available under CC-BY-SA unless otherwise noted.