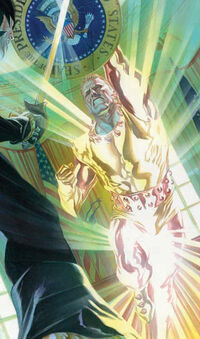 In the year 1982, exhausted by the second and third World Wars, civilization was conquered by Mongols led by Emperor Seng I. He ruled from his palace in New-New York. Gene West was chosen by a group of scientists to be the test subject for a special experiment. It worked, giving him the strength of a steam engine and the hardness of tempered steel. With these powers, he fought as Power Nelson against the rule of Emperor Seng I. He wore an eye patch as Gene West to protect his secret identity.

Later, Gene West was elected President of the United States. Unknown to anyone, however, West was working in secret with an evil organization known as the Supremacy, which included Emperor Seng II, descendant of his old enemy.

Community content is available under CC-BY-SA unless otherwise noted.