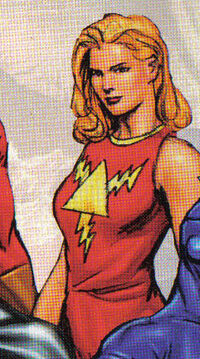 Isabel Blake, a friend of Lash Lightning, is given powers when Lash accidentally pumps "thousands of volts" of electricity through her body. However, instead of killing her it gives her superpowers. She becomes Lash's sidekick,Lightning Girl. Her powers include flight, electricity generation, radiating "lightning heat," and super-speed. Her powers are recharged by electricity and can also track Lash via their shared "lightning impulses."