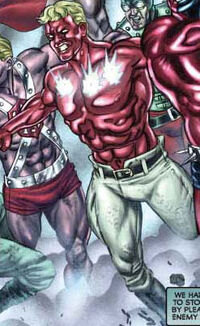 While excavating near Mt. Rushmore, Jack Bradley,a construction worker, was caught in an explosion and then an avalanche, covering him in a mysterious dust. Later, he discovered that he could transform into flint whenever he became angry. His powers while in this state include superhuman strength and invulnerability. His powers also automatically activate upon coming into contact with metal, but they would wear off after a short while unless he touched metal again.

He was among the heroes who participated in the Battle of Kokura.

Turns into flint when angry or when coming into contact with metal. While in this state he possesses superhuman strength and invulnerability.

His powers wear off after a short while if he does not come into contact with metal again.

Compare and contrast his powers and trigger with Man o' Metal.