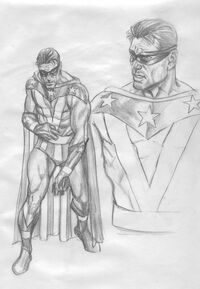 Jerry Steele was an American air ace who fought for his country during World War II as part of the American Eagle Squadron. On one of his missions, he wound up ferrying Ginger Dare, a member of secret international anti-Nazi organization known as the V-Group, into the occupied territories, only to be captured by the Nazis before he could leave. He was tortured and placed in the concentration camp. When the prisoners tried to break out, Jerry distracted the Nazis long enough to give them time to escape. Suffice to say, the Nazis were not to happy about this, so they killed him and dumped his body outside the camp.

Hours later, a mysterious farmer brought Jerry back to life using a mysterious potion. He snuck him past the Nazi patrols and took him to his mountain cottage in Czechoslovakia. He informed Jerry that he was "Father Duroc," leader of the V-Group. For three months, he treated the young pilot with mysterious chemicals until Jerry recovered.

Once Jerry was back to full strength, Father Duroc gave him a magical costume that gave him "greater physical and mental power than other men have." He charged Jerry to use his powers to fight the Nazis in America.

Now calling himself V-Man, he returned to his homeland and recruited a group of local kids, creating an organization known as V-Boys Defense Corps. The V-Boys served as V-man's all-purpose assistants. V-Man communicated with them using a two-way video link he wore as a ring on his finger. The stories never bothered to explain where he got it from. V-Man was also occasionally assisted by Ginger Dare. For some reason, V-Man chose not to reveal his secret identity to her, allowing her to believe that Jerry Steele was a cowardly deserter. This was especially weird when you consider that he had no problem sharing his secret identity with the V-Boys.

Initially none, but after escaping from the urn he emits a deadly virus.

The "...-" in the title of V...-Comics is morse code for the letter V. After this character's title cancelled, the creator liked him so much he seemingly decided to rename him the Puppeteer. (and later Captain V) He had a new secret identity and a slightly tweaked costume, but the morse code "...-" could also be the first four notes of Beethoven's fifth - the piece of music that gives the Puppeteer his powers and costume!