Edit
watch 01:36
We're Getting Mutants in the MCU - The Loop
Do you like this video?
Play Sound
Green Lama 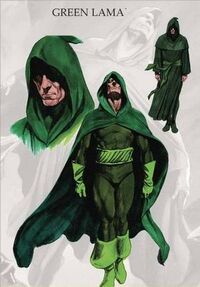 Jethro Dumont, a rich resident of New York City, spent ten years in Tibet studying to be a lama and learning many mystical secrets in the process. He receives his Green Lama powers by reciting the mantra "om mani padme hum." Dumont is also endowed with superhuman powers acquired through his scientific knowledge of radioactive salts. Dumont has two alter egos - the crime-fighting Green Lama, and the Buddhist priest Dr. Pali.

After the Battle of Kokura, the Lama returned to Tibet. He stayed there until the elderly Fighting Yank came and confessed that he had trapped their old allies in Pandora's Urn. The Lama, now at one with the meta-natural world, used plant to transport Yank and himself to New York. There they met with Dynamic Man, the keeper of the Urn. Yank broke the Urn, freeing the trapped heroes, after Dynamic Man had shown himself to be a villain. The Lama used his powers to transform New York into New Shangri-La, and recruited the many returning heroes to join him there.