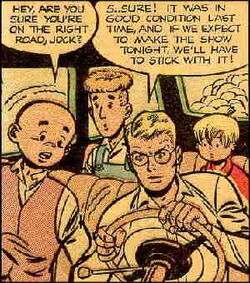 The Little Wise Guys first assited the Death Defying 'Devil in 1942 when he fought The Wizard, the leader of a German-American Cult. The four Wise Guys were Meatball, Peewee, Scarecrow and Jock. Meatball was killed during one of their adventures, and Curly, repenting for his former criminal dealings, joined the group. The Wise Guys assisted 'Devil until he joined the armed forces. The group stayed together for several years.

After the 'Devil vanished, some of the Wise Guys tried to carry on in his place. Scarecrow was killed wielding his mentor's boomerang in battle. After the heroes returned, Curly didn't believe the 'Devil to be the original. He took it upon himself to prove the 'Devil as an imposter, taking up the mantle of the Deadly Dreaded Dragon.