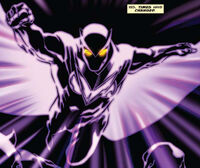 Special investigator Nick Terry, frustrated seeing criminals set free due to the regulations that seemed to hinder the police force, put on a costume and armed himself with high-tech gadgets (including a blacklight ray that projects darkness), transforming himself into the Owl. After the war, Terry was captured by Fighting Yank and trapped in the Urn. Recently freed, he appears to have gained true flight abilities.

Several decades trapped in the Urn has apparently changed Terry, making him capable of flying without the aid of exotic technology. He has also gained the ability to project fields of black light, disorienting his foes for a short period of time.