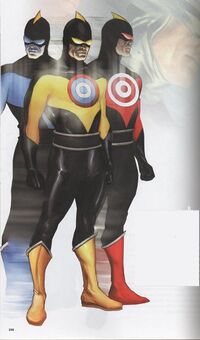 The Target is Niles Reed, a metallurgist who doubled as a spy for the U.S. Army. Niles’ brother James was killed by gangsters, so the enraged Niles decided to go after them. He designed a special suit for himself, avenged his brother’s death, and then began helping the military on the home-front.

The Target had no powers, but he wore an indestructible metallic fibre suit which rendered him bullet- and grenade-proof. He also had spy skills. Dave Brown and Tommy Foster are the wisecracking and crime-fighting sidekicks of the Target. They also had no superpowers, but wore the same indestructible metallic fibre suit as the Target. Sometime after World War II, the Fighting Yank trapped the Target and the Targeteers in Pandora's Urn simultaneously. After the Urn was broken, the Target and the Targeteers reappeared in Amsterdam. Their time in the Urn seemed to have joined the three together.

After the urn was busted, the Targeteers possess the ability to link together as one with superspeed. They are now the fast moving targets.