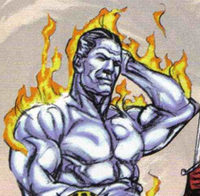 Foundry worker Pat Dempsey has an unfortunate accident when a vat of white hot metal spills on him. Rather than being killed, however, he experiences an unexplainable chemical reaction. His skin becomes like metal, and he bursts into blue flames whenever he is exposed to heat or electricity. He quits the foundry and goes to work as a private investigator, solving crimes for pay and fighting evil for free.

In his normal human body, he is as vulnerable as any other person, but while on fire, he can melt bullets and grenades. He can breathe underwater and is bulletproof.

Man o' Metal was one of the heroes who attended the Flame's funeral.

While on fire, he can melt bullets and grenades. He can breathe underwater and is bulletproof.

He is vulnerable when his powers are not in use.

Compare and contrast his powers and trigger with Fearless Flint.