Start a Wiki
The Patriots 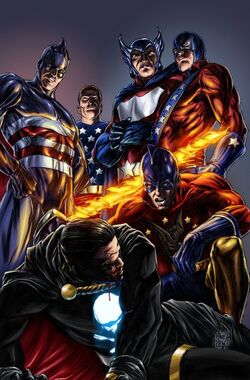 After the breaking of Pandora's Urn, patriotic heroes Man of War, Liberator, The Flag, American Eagle and the Super-American made their way to Washington, D.C. and pledged their loyalty to President West. The first test of their allegiance came when the Black Terror waged a one man assault on the White House.

Retrieved from "https://projectsuperpowers.fandom.com/wiki/Patriots?oldid=5156"
Community content is available under CC-BY-SA unless otherwise noted.