Edit
watch 01:36
We're Getting Mutants in the MCU - The Loop
Do you like this video?
Play Sound
Woman in Red 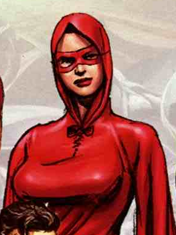 Frustrated by the limitations of her job, policewoman Peggy Allen created a secret identity. As the Woman In Red, she wore a red floor length coat, hood and mask. Her detective and firearm skills helped her accomplish her crimefighting goals without the restrictions imposed on everyday police officers. During World War II, Allen fought alongside the men, often ending up behind enemy lines. As the first female costumed hero in Project Superpowers universes, she served as a source of inspiration for heroines that followed in her footsteps. After the end of World War Two, Allen was trapped in the Urn by Fighting Yank, and was only recently freed.

Allen has alluded to being a lesbian, at one point commenting that she "was not normally drawn... to most men."[1]