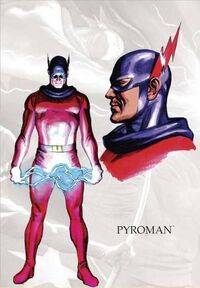 Pyroman is the secret identity of research student Dick Martin. Due to his work with high voltage electricity, his body developed the ability to store current. He discovered this ability after he was wrongly charged with murder and sentenced to die in the electric chair. He instead found himself possessed with electrical based powers. After clearing his name, he decided to use his powers to fight crime.

Sometime after World War II, the Fighting Yank trapped Pyroman in Pandora's Urn. After the Urn was broken, he reappeared in Los Angeles, coming to the aid of the Flame and Hydro in their battle with Dynamic Boy. This encounter resulted in Pyroman electrocuting Dynamic Boy. As the trio was about to be arrested, they were found by the Green Lama and other heroes.

Pyroman is capable of creating and absorbing electricity. But in the golden age Pyroman could create electricity, transmit electrical bolts, manipulate metal, attain flight by magnetic currents and radio waves, create electrical force fields and electromagnetic pulses. He has yet to demonstrate all these powers.