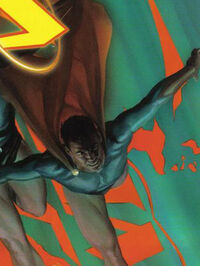 Ricky McQuade is the android "brother" of Bert McQuade, Dynamic Man. He fought crime with Dynamic Man in the 1940s. He remained with Dynamic Man as he built his Dynamic Forces empire in the years following World War II.

After the Fighting Yank broke Pandora's Urn and freed the trapped heroes, Dynamic Boy fought against his former allies. In a confrontation with the Flame, Hydro and Pyroman, Dynamic Boy was electrocuted and pronounced dead.

After the public funeral of Dynamic Boy, he dug out of his grave and removed his face. He and Dynamic Man implemented a plan for Dynamic Boy to impersonate one of the returning heroes. Two days later he found and killed Kid Terror, then assumed his identity, positioning himself as a member of the Inheritors.