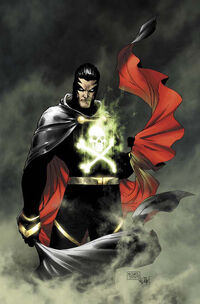 They call it treason when you betray your country, right? What do you call it when your country turns on you?

Pharmacist Bob Benton was being shook down for protection money. After he convinced the goons to give him one more day, they stormed out - knocking down teenager Tim Roland on the way. Feeling bad for Tim, Benton hired him as his assistant.

That evening, Benton and Tim were working on Bob's secret project - trying to develop a formula to help "run down people," as Bob puts it. Tim accidentally adds formic acid, which comes from red ants. The resulting "formis ethers" gave Benton super strength and invulnerability. He decided to use these powers to fight crime, starting with the goons who were hounding him. He sent Tim to a costume shop and then became the Black Terror.

After putting an end to their racket, Tim learned of a plot to crash a subway train. The Black Terror went to prevent the crash. Tim, thinking the Terror may need help, reproduced the experiment and developed the same powers as the Black Terror.

Tim showed up in the nick of time and the crash was prevented. The Black Terror and his sidekick Tim, together known as the Terror Twins, went on to fight threats both domestic and foreign throughout World War II.

After 1950, Fighting Yank trapped the Black Terror in Pandora's Urn.[1] When the Urn was broken, Black Terror was the first hero to return. He returned in New York City, in the middle of the fight between the Dynamic Forces and Yank and Green Lama. Though initially determined to kill Yank for trapping him in the Urn, he joined with Yank and Lama in their battle.

He fought alongside his allies, all the while looking for his lost sidekick, Tim. When he heard the President of the United States was holding a sidekick prisoner, he took up a one man assault on the White House. This put him in conflict with the returning Patriots, who acted as bodyguards for President West.

During WWII, Black Terror had superhuman strength and endurance, and was impervious to most conventional weapons. Following his confinement in the Urn, Benton has been suffused with an unnatural energy, and though he has not tested it yet, he may be capable of going for extended periods without sleep or sustenance.

The same energy that has increased Benton's powers has damaged his reasoning and judgment.

Retrieved from "https://projectsuperpowers.fandom.com/wiki/Robert_Benton?oldid=5758"
Community content is available under CC-BY-SA unless otherwise noted.