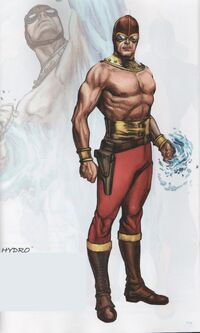 Harry Thurston, a young chemical engineer accidentally compounded a formula to convert human flesh and blood into water. A huge container of this remarkable solution was spilled, and splashed over Bob Blake, Harry's friend, causing him to disintegrate and become pool of water on the laboratory floor. Promptly an antidote was concocted, and with the aid of this, Bob regained his natural form. He then discovered that he could control this phenomenal change merely by power of thought. He sometimes partnered with the young hero Rainbow Boy.

The Fighting Yank trapped Hydro in Pandora's Urn sometime after World War II. After the Urn was broken, Hydro reappeared in Los Angeles, where he doused a wildfire that was inadvertently started by the returning Flame. Hydro, the Flame and Pyroman battled Dynamic Boy in a brief encounter that resulted in Pyroman electrocuting Dynamic Boy. As the trio was about to be arrested, they were found by the Green Lama and other heroes.

Retrieved from "https://projectsuperpowers.fandom.com/wiki/Robert_Blake?oldid=5177"
Community content is available under CC-BY-SA unless otherwise noted.