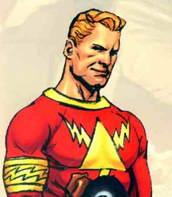 Robert Morgan was the American student of an ancient Egyptian mystic called The Old Man of the Pyramids. (How they met is unknown, possibly the Old man raised him after his parents died.) He schooled Morgan in "all the ancient and modern sciences" and gave him the "Amulet of Annihilation, the weapon of the forces of right" which he tied around his right arm. The Amulet grants him powers including super-strength, super-speed, flight, the ability to generate electricity and radiate “lightning heat,” and a measure of invulnerability (e.g., he can contain the explosion of a grenade with his bare hands). His powers can be recharged by electricity. He was given the condition that his powers would work only for good. The Old Man gave Morgan a superhero costume and the name Flash Lightning and sent him to New York to fight evil. Morgan changes his name two more times, first to Lash Lightning and then to just Lightning. He fought villains such as the Phoenix, the Mummy, and the Mastermind. Later, Lash meets Navy brat Isobel Blake while unraveling The Teacher's schemes and is impressed by her courage. When the Teacher straps him to a device that will kill him by amplifying his own electricity, he only barely survives. He gives his powers to Isobel by charging her with thousands of volts of electricity, allowing her to help save the day. She then dons her own costume and becomes his partner, Lightning Girl. They are able to track each other via their “lightning impulses.”