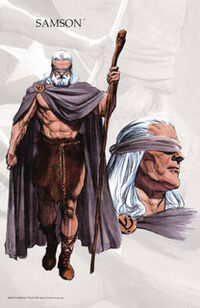 Samson is a direct descendant of the biblical Samson. Like his ancestor, Samson has immense strength and endurance, but loses his powers if his hair is cut. Samson learned about his heritage when he was a grown man, after his mother revealed his ancestry.

In college, his friend Professor Dunn showed him a new invention, an "iconoscope", which allowed the viewer to watch remote scenes without a transmitter. The iconoscope picked up the image of an eastern holy man, who was praying for a higher power to sent someone to battle evil. Samson used his superpowers to visit the holy man, and agreed to be that champion.

In issue #10 of Fantastic Comics, Samson gained a young side-kick who he named David. He had no apparent superpowers and was the sole survivor of a plane crash. Orphaned after the crash, Samson took him into his care.

Godlike, but has been wounded by Zeus

Retrieved from "https://projectsuperpowers.fandom.com/wiki/Samson?oldid=5977"
Community content is available under CC-BY-SA unless otherwise noted.