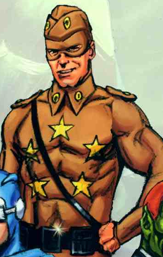 "When the cause of freedom and democracy is threatened then, from out of the blue sky, shall come the Unknown Soldier - dauntless American champion of all who fight under the Stars and Stripes - from the smallest child to the bravest doughboy. Who is he? Nobody knows! Where does he come from? Nobody knows! He is just...the Unknown Soldier." His abilities include superhuman strength,invulnerability, flight, and the power to spin in the air fast enough to generate a tornado. He carries a "nitro gun" which fires explosive bullets. The Unknown Soldier once battled the foe of Captain Courageous, Captain Nippo.

Soldier Unknown was one of the Super-Mysterymen immediately captured by the US government after their release from Pandora's Urn.

superhuman strength,invulnerability, flight, and the power to spin in the air fast enough to generate a tornado.