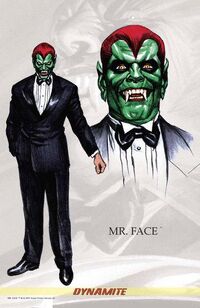 A newscaster by trade, Tony Trent would use his position to learn of crimes and catch those behind them as the Face. He had no powers, but relied on his fighting ability and wore a mask to strike fear in his enemies. Later circumstances caused Tony to give up his Face identity, but he still worked for the cause of justice.

Sometime after World War II, Tony was visited by the Fighting Yank. Yank convinced him to put his mask on again. Face was on a mission with Doc and Fighting Yank while attempting to infiltrate a Fifth Column operation in Virginia when he disappeared, trapped in Pandora's Urn by the Yank.[1].

When the Urn was broken, Tony reappeared with a strange new power. He could cause anyone who looked at him to experience their worst fears. He was also experiencing his own worst fear - he could no longer take his mask off.

Ability to cause fear in others

Limited control over powers & unable to remove his mask