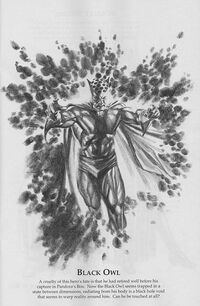 After Doug Danville enlists in the army and retires from crime-fighting, he passes the mantle of the Black Owl to Walt Walters. Walt assumes the role of the Black Owl, fighting side by side with his twin sons, Yank and Doodle, who were already experienced crime-fighters by that time. Eventually, Walt decides to retire from the hero business as well, after being side-lined with a bullet wound, leaving Yank and Doodle to their own adventures again.