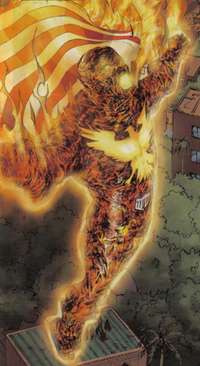 American patriot Bill Powers fought the Nazis as a spy and then put on a patriotic costume and fought against them as the Eagle. He was assisted by his sidekick, Buddy. At one time he had wings and could fly. Later he lost his wings but could fly via his suit. He was later captured by the yank in the urn and when he was freed he was on fire.